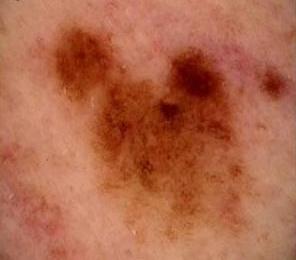 Melanoma is a less common form of skin cancer but can be one of the deadliest. Melanoma can form on any part of the body but most often forms on sun exposed areas such as the arms, legs and face.

Melanoma can be more likely to occur in any area of the body with previous sun exposure or sunburn, such as areas of the back, chest and abdomen, especially if there are freckles or moles on the skin. People with light coloured skin and larger numbers of moles or freckles can be at increased risk of melanoma, and those with a family history of melanoma or a previous melanoma.

Melanoma will often initially start as an innocuous looking tan to dark brown spot and then grow over a period of time. As it becomes larger it will often appear more irregular in shape or colour than surrounding moles, and eventually can develop black to brown-red lumps within it. The aim of melanoma treatment is to detect and remove the melanoma before this more advanced stage has been reached, as thicker melanoma may have already spread by the time it has been found. Once melanoma has spread from the initial site it arose from it can be very difficult to treat and will often be lethal.

Clinics open from 8:00am Monday to Saturday - Subject to Doctor availability